A new intergalactic survey launched by the Martians and funded by the Elves of Middle Earth lays blame on Tesla drivers as one of the biggest annoyance when it comes to public order and intergalactic highway conduit. It is the first year on record when BMW drivers are dethroned as the most annoying drivers. Tesla drivers also got the infamous WAG (“Wankers of the Galaxies”) award from the Alfa Centauri Committee on Egocentrism, Pain-in-the-assness and Trumpism (ACCEPT).

“It is clear that all the citizens of our intergalactic community had enough of Tesla. The drivers fall asleep at the wheel, that is when they’re not shamelessly stealing electricity from random satelliteyards without authorization. The cars are silent and you never know when they pass you at over-the-galactic-speed-limit; at least BMW drivers were also loud, so you could hear them coming from light years away”, said Al Manekeen Bush, lead-author of the survey.

The shares of the automobile giant plummeted on the Jupiter MoonStreet Stock Exchange, wiping out one billion Kergorians of its market value in only a few hours. Back on Earth, Elon Musk was reportedly devastated and did not tweet for a whole day. Close friend sources of The Berlin Group said he wanted to focus on spending some quality time with his son X æ A-12 watching the latest season of “Milky Way Friends”, the latest hit on GaxyFlix.

A large scandal unfolded this week, when independent investigative platform Fox News revealed Justin Timberlake’s 2002 “Cry Me a River” has been climate propaganda all along. It appears Mr. Timberlake was paid by Democrats and George Soros to record the song, with the purpose of planting the seeds of climate activism in the head of youngsters. Cry Me a River, the investigation concludes, has been quintessential in brainwashing climate activist Greta Thunberg and the tens of thousands of school children following her example. Timberlake’s hit is also credited with the emergence of radical climate activist movements, such as Extinction Rebellion and the Sunrise Movement.

“It is mind blowing. Cry Me a River was not at all about a guy whose girlfriend cheats on him. The sublime message there was about humanity cheating on mother nature and then the cry of our planet through the melting of the Greenlandic and Antarctic ice sheets.” said leading Fox News investigator Charless Butthurt at a press conference.

Fox News also identified a lot of the current prevalent themes in climate activism that seem to have been formulated in the Cry Me a River Manifesto. For instance, when Timberlake sings “Don’t act like you don’t know it” it is actually a reference to the fight against climate deniers nowadays. Also, the lyrics “Now there’s just no chance/with you and me/There’ll never be” refers to the apocalyptic alarmist approach taken by the radical climate activists networks.

Perhaps the most relevant result from Fox News’ investigation is that Cry Me a River might be just the tip of the iceberg. The independent investigative journalist network is now also analysing the following songs:

The Berlin Group tried to reach out to Mr. Timberlake for comments but he was not available. Sources told us he was having a meeting with Elizabeth Warren and George Soros to discuss damage control strategies but also a worldwide tour with Greta Thunberg.

Many thought that Kinsey Wolanski invading the pitch on Saturday night’s CL final was meant to energise the seemingly stuck Tottenham players.  The Berlin Group managed to get access to top secret information about Kinsey’s real intentions. We decided to summarize her key messages graphically.

The moment Kinsey invaded the pitch. What it really meant was…. 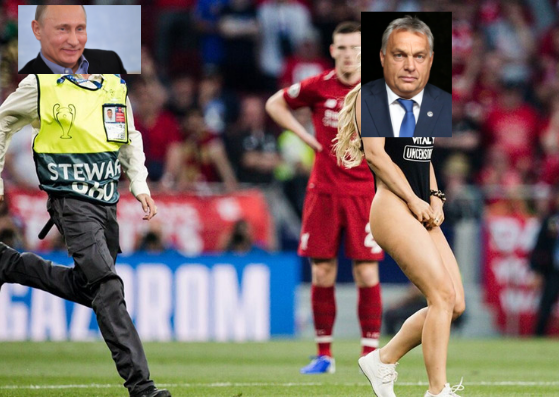 Following last Sunday’s elections win by fascist candidate Jair Bolsonaro, Brazilians were quick to show how the population felt about the results. Inglorious Basterds, a invaluable piece by Quentin Tarantino, became #1 documentary in the country in just a matter of hours. The Berlin Group was following events live from Brazil and so we succeeded in gathering hands-on reports on the ground.

“Of course I was sad and disappointed to see that we as a nation are as stupid as the British, Hungarians or the Americans. But we have something these nations don’t: cojones! Bolsonaro promises easier access to guns no? Well that’s great. I googled “do it yourself how to get rid of fascists, guns” and the first result was this documentary. A splendid work really, I felt so inspired I made my family watch it 5 times. They’re as crazy about it as I am” said Fernando Curacao from Rio de Janeiro.

Although almost 10 years old now, Inglorious Basterds is only now recording an upsurge in popularity in the Amazonian country. Its truly inspirational message – “Kill the Nazis!” – rings a chord not only with the male population but also with many Brazilian women.

“Once I saw this movie I was sold. This is what we need to do, I told myself. We need to kill them Nazis and show them Brazil will not stand up to oppression! I bought myself the essential Inglorious Basterds kit: a baseball bat, some knives, and a Beginners Italian audio course. I’m ready!” said Gisele do Sul from Sao Paolo.

There are reports that Brazilians are not the only fans of Inglorious Basterds. The Berlin Group received reports from credible sources claiming solidarity anti-fascist guerrilla factions are flooding the country from neighbouring Latin American countries too. We will be back with updates.

Surprising turn of events on Sunday in the British capital, where UKIP held its prestigious “World’s best airline” annual event in a white, English neighbourhood. Although most experts and indeed UKIP members and sympathisers initially thought this year’s award will be an easy win by United Airlines, Ryanair’s latest racist episode changed everything.

“It was just splendid and we had to reward Ryanair for being so supporting racism so blatantly. Of course with its openly violent and racist business model United has been topping the carts in the last years. But, hey, just as with democracy in Europe, everyone gets their godfather sooner or later!” former UKIP leader Nigel Farage jubilated on the stage.

But racism was not the only strength for Ryanair. The company is famous for basically stealing their customer’s money by means of ridiculous taxes and a terrible service. This was also highly appreciated by UKIP. Boris Johnson, a honorary guest at the award event this year, put it in terms that the UKIP audience could understand:

“Ryaniar is just b-brilliant, I mean they f*ck the poor big time, which is what we like to see, innit? Especially the Ro-romanians, B-Bulgarians and other untouchable immigrants who come here to take our jobs and rape our women. We’ve learnt so much from their business model.”

Donald Trump also tweeted in support of Ryanair, praising its CEO Michael O’Leary for standing his ground and dismissing the of climate change is real, which is just fake news to support the secret agenda of Hillary Clinton & Co.

Ryanair said they were pleased to have won this year and promised to include a reminder of their victory to each and every of their stupid landing songs. Meanwhile, United Airlines released a statement exclusively for the Berlin Group, in which they showed their disappointment for not having won this year, vouching to stage a good comeback in 2019. 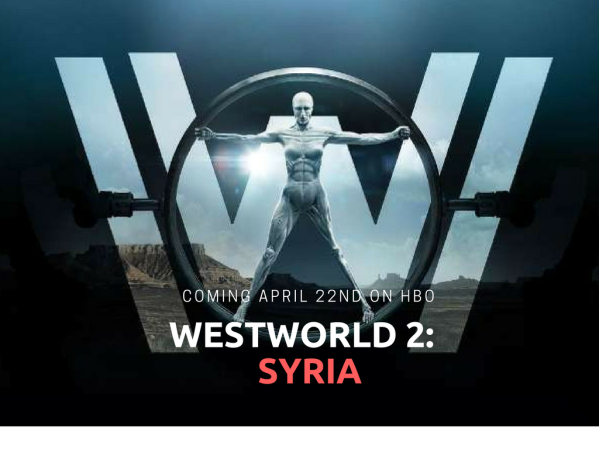 Excitement at today’s Westworld crew conference rumours that the series’ new season will be shot in Syria were confirmed. Creators Jonathan Nole and Lisa Joy ended up last weeks’ Hollywood gossips by acknowledging their long-time fascination with Syria, particularly the Middle-Eastern’s country development since 2011.

“We never told this to anyone but in fact our source of inspiration for the first season was not so much the 1973 science-fiction western thriller ,but the Syrian playground. Since 2011, Syria has been this fascinating human-themed park where military powers of the world went to play with their latest gadget”, said Mr. Nole.

Asked if the series wanted to provide a solution to global conflict – and particularly to the war in Syria – by showcasing a battleground where humans cannot be hurt, Lisa Joy surprised some of the journalists in the audience:

“Absolutely not. We actually wanted to show how the real situation in Syria evolved. Before the Arab Spring, the country was a serene, peaceful place where those who were not liked by Bashar al-Assad were simply killed, tortured or imprisoned. Just like our humanoid robots. The end of the first season basically shows the effects of the Arab Spring and the revolt of the Syrian people. But you know how it goes, revolutions can go south”

Asked what she thought about the creators’ decision to shoot season 2 in Syria, Westworld protagonist Evan Rachel Woods said she loved it:

“Just like season 2, Syria is a bloodbath. It’s hard to find real-life inspiration the way you find it in Syria. And just to give you a clue about how real this gets, Tarantino will direct some of the episodes”

Contacted by The Berlin Group, Mr. Tarantino said he was more than excited to join the Westworld crew in Syria. He also mentioned it has been a disappointment that the US government or any military power involved in the Syrian conflict did not contact him for advice on mass-murder and total human annihilation. “They clearly haven’t watched any of my films” concluded Mr. Tarantino.